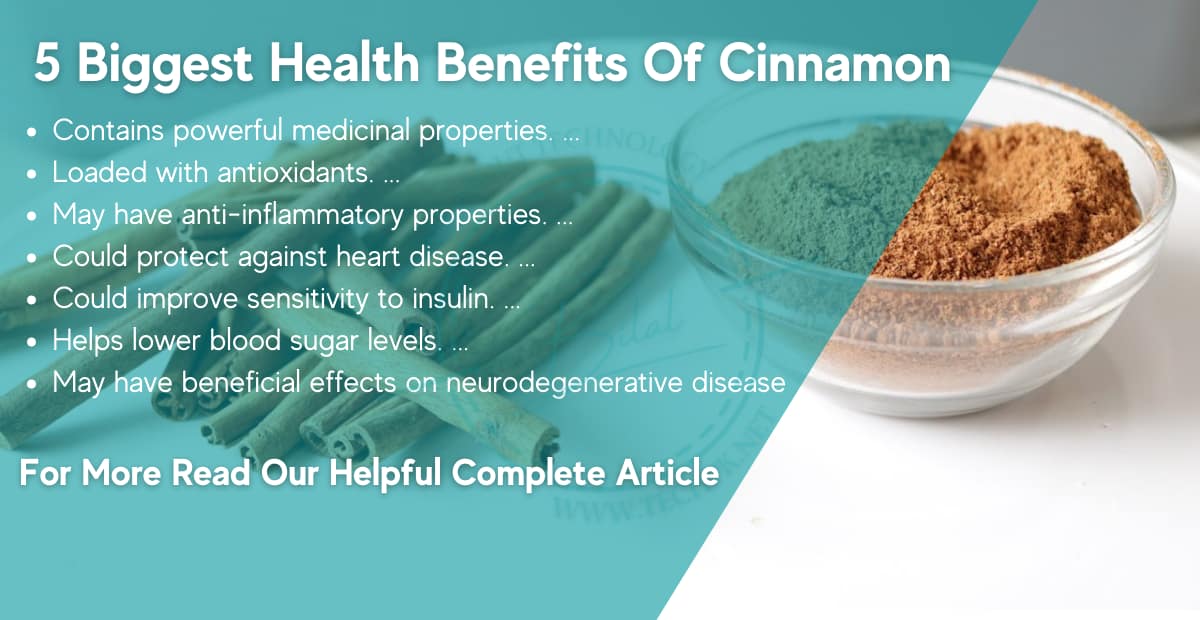 If you’re looking for ways to boost your health, cinnamon is a great choice. It has powerful medicinal properties and contains antioxidants that help protect your body against various diseases. In addition to being a healthy supplement, it may also be beneficial to your brain.

Cinnamon has antioxidants in it and can provide health benefits. It has been shown to decrease the risk of heart disease and improve blood sugar control. Besides, cinnamon has antibacterial and insecticidal properties.

Besides, it also has neurotrophic factors that encourage new neurons to develop. This protects the brain from free radical damage and helps neurons heal.

There are many ways to get antioxidants into your diet. You can add herbs to recipes and foods, or you can take supplements. But, you should not take supplements if you have a liver problem.

Adding herbs or spices can be an easy way to boost your antioxidant intake. Using them can be as simple as a sprinkle on your yogurt, or you can add them to your meals and desserts.

Another way you can get antioxidants into your diet is by eating more whole grains and fruits. Cranberries and blueberries are two of the best sources of antioxidants. Add them to your cereal, salads, and mocktails. They are especially tasty in a smoothie.

When you take antioxidant supplements, you should choose products that have been approved by third-party organizations. These include NSF International and the U.S. Pharmacopeia. However, you should consult your doctor before taking any supplement.

May have anti-inflammatory properties

Cinnamon has numerous antioxidant properties that may benefit our bodies. They reduce oxidative stress and aging, and protect our bodies from chronic disease. It also has antimicrobial, cardioprotective, and insecticidal properties.

One of the main compounds found in cinnamon is cinnamaldehyde. This substance is a powerful inhibitor of nitric oxide production. Nitric oxide is a gas that is often produced in our body and is associated with a variety of health problems. The chemical can also prevent the growth of cancer cells.

In addition, studies have shown that cinnamon has antidiabetic and neuroprotective properties. It also has antioxidant properties that can help to protect the heart and brain. However, more research is needed to confirm these claims.

An animal study showed that cinnamon was effective at reducing levels of inflammatory markers. This is especially important because inflammation is a key part of our immune system’s response. Chronic inflammation can make us unwell and can increase our risk of cancer and other serious diseases.

Another study found that cinnamon decreased blood glucose levels. Studies also suggested that it improved insulin resistance in those with type 2 diabetes.

Could improve sensitivity to insulin

Cinnamon is thought to improve insulin sensitivity in the brain and liver. However, a number of research gaps remain, including the role of the cinnamon extract itself. It’s important to keep up with clinical evidence and stay abreast of studies.

Some of the compounds in cinnamon, such as coumarin, cinnamic acid, eugenol and terpene alcohol linalool, are believed to have an insulin-potentiating effect. They also increase glycogen synthesis in the liver. These compounds may help alleviate symptoms of metabolic syndrome, which includes increased triglyceride and low HDL cholesterol.

Several clinical trials have investigated the effects of cinnamon on type 2 diabetes. While some have been positive, others have been negative. Several trials have used different methods of extraction and have different patients, so the results might vary.

One of the best ways to control blood sugar levels is to follow a healthy diet. A well-balanced diet should include a variety of fruits and vegetables. You should also include some protein and dietary fiber.

If you have diabetes, it is important to learn which foods help lower blood sugar. This will help you avoid the health risks associated with high glucose.

Vitamin C and vitamin E can both assist in lowering blood sugar. They also help protect the cell membranes from oxidative stress.

Other helpful vitamins and minerals include chromium, which is essential for energy production. It helps to stimulate insulin receptors and move glucose into cells.

Exercise is also one of the most effective ways to lower blood sugar. The American Diabetes Association recommends exercising at least three to four days a week. It will help you improve your cardiovascular health, reduce stress, and build lean muscle mass.

Cinnamon may protect against cancer

Cinnamon has been proven to help in the battle against cancer. It has anti-inflammatory, antioxidant and antibiotic properties. In addition, cinnamon has been shown to prevent dental and digestive diseases.

Cinnamon is one of the most effective spices in the world, and it has been used for centuries as a medicinal herb. It is derived from the bark of the Cinnamomum verum tree. The bark contains a compound called cinnamaldehyde. This compound is responsible for the unique odor and flavor of cinnamon.

Research has shown that cinnamon can inhibit a cell’s ability to divide, thus reducing the growth of cancer cells. Moreover, it is also able to inhibit angiogenesis, the process by which new blood vessels form.

A study showed that cinnamon can inhibit the development of HIV-1, the pandemic virus that attacks the immune system. There have been numerous test tube experiments and human trials that have proven that cinnamon has a protective effect against the virus.