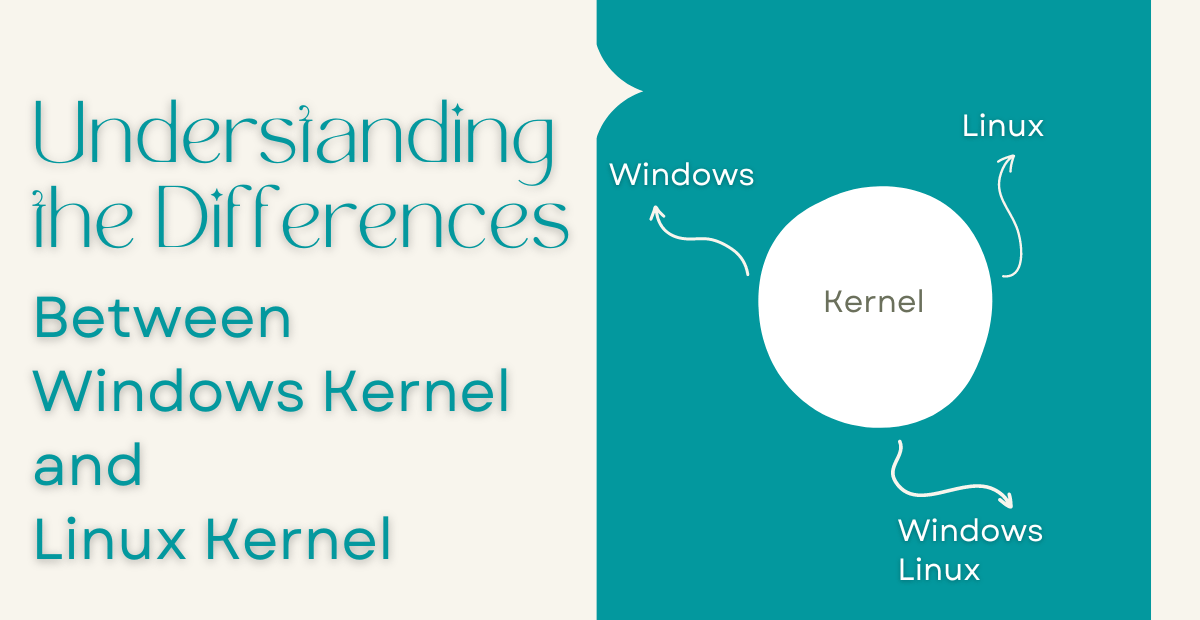 Whether you’re a new computer user or an experienced one, understanding the differences between Windows Kernel and Linux Kernel is essential. While both of them are operating systems, they are very different in terms of their capabilities and design.

In this article, we will be taking a look at the major differences between Windows kernel and Linux Kernel to help you make an informed decision when it comes to choosing which one to use. We’ll discuss topics such as performance, reliability, security and more so that you can understand why each kernel best suited for certain tasks.

Introduction to Windows and Linux Kernels

The Windows and Linux kernels are the central components of their respective operating systems. They are responsible for managing resources and providing a platform for applications to run on.

While both kernels are very similar in many respects, there are also some important differences between them. Understanding these differences is essential for anyone looking to work with either Windows or Linux.

The Windows kernel a proprietary piece of software developed by Microsoft. It is closed-source, meaning that only Microsoft has access to the source code. This makes it difficult for others to improve or extend the kernel.

The Linux kernel, on the other hand, is open-source. This means that anyone can view, edit, and contribute to the source code. The Linux community is very large and active, so there are always people working on improving the kernel.

One of the biggest differences between the two kernels is how they handle drivers. Drivers are pieces of software that allow the operating system to communicate with hardware devices. Windows uses a closed model for drivers, meaning that only Microsoft-approved drivers can be used with Windows. This makes it difficult to use non-standard or unsupported hardware with Windows.

Linux uses an open model for drivers, meaning that anyone can write a driver for any piece of hardware. This makes it much easier to use non-standard or unsupported hardware with Linux. In fact, many hardware manufacturers provide Linux drivers for their products directly on their websites.

Ultimately, both Windows and Linux are great operating systems with their own strengths and weaknesses. It’s important to understand these differences in order to make the best decision when choosing which one is right for you.

Design and Architecture of Windows Kernel

The Linux kernel is a monolithic kernel that provides all the same services as the Windows kernel, but also includes additional features such as network stack and file system support. Linux kernel designed for modularity, meaning it can easily extend with new functionality. The Linux kernel also supports Preemptive Multitasking.

Design and Architecture of Linux Kernel

This means that all the core functionality of the operating system is contained within a single large program, which can make it more difficult to debug and patch. However, it also makes the system more efficient and scalable, as all the components tightly integrated.

Another key difference that the Linux kernel open source, while the Windows kernel is closed source. This means that anyone can view and modify the source code for the Linux kernel, which makes it very easy to customize for specific needs.

It also means that there are many different versions of the Linux kernel available, each with its own unique features and capabilities.

Finally, the Linux kernel designed to portable, meaning it can be run on a variety of hardware platforms. The Windows kernel, on the other hand, designed specifically for use on Intel-compatible PC hardware. This makes it much more difficult to port applications and drivers written for Windows to other platforms.

Differences in Memory Management between Windows and Linux Kernels

There are a few key differences in how memory management works between Windows and Linux kernels. For one, the Windows kernel uses a paginated memory system, which means that each process given its own page file.

This can lead to more effective use of memory, but can also create fragmentation issues over time. The Linux kernel uses a more traditional approach of allocating virtual memory for processes, which can be less effective but is also less likely to cause fragmentation.

Another key difference is how the two kernels handle caching. The Windows kernel uses what’s called an “MMU cache”, which stores frequently used pages in physical memory so that it can quickly access by the processor.

The Linux kernel, on the other hand, uses a “demand paging” approach, which brings pages into memory only when needed. This can be more efficient in some cases, but can also lead to longer delays when accessing data.

Finally, there are differences in how the two kernels manage address spaces. The Windows kernel uses what’s called “flat” model, which gives each process its own 4GB address space.

The Linux kernel uses a “segmented” model, which allows for multiple address spaces per process. This can be more efficient in terms of memory usage, but can also make it more difficult to debug issues.

Differences in Security between Windows and Linux Kernels

There are a few key differences between the Windows and Linux kernels that impact security. For one, the Windows kernel is a closed-source kernel while the Linux kernel is open-source. This means that with Windows, you’re trusting Microsoft to keep the kernel secure, while with Linux you can inspect the code yourself or trust the community to keep it secure.

Another difference is that the Windows kernel has historically been more prone to vulnerabilities due to its complexity. The Linux kernel, on the other hand, is fairly simple in design and as a result, has been much more resistant to vulnerabilities.

Hopefully this article has helped to demystify the differences between Windows and Linux kernels. While there are a lot of similarities between them, they also have some key distinctions that can make or break your computing experience.

Knowing which one is right for you will determine how enjoyable and powerful your system can be. Whether it’s Windows or Linux, understanding the basics of their respective. Kernels are essential in making an informed decision when purchasing a computer or operating system.